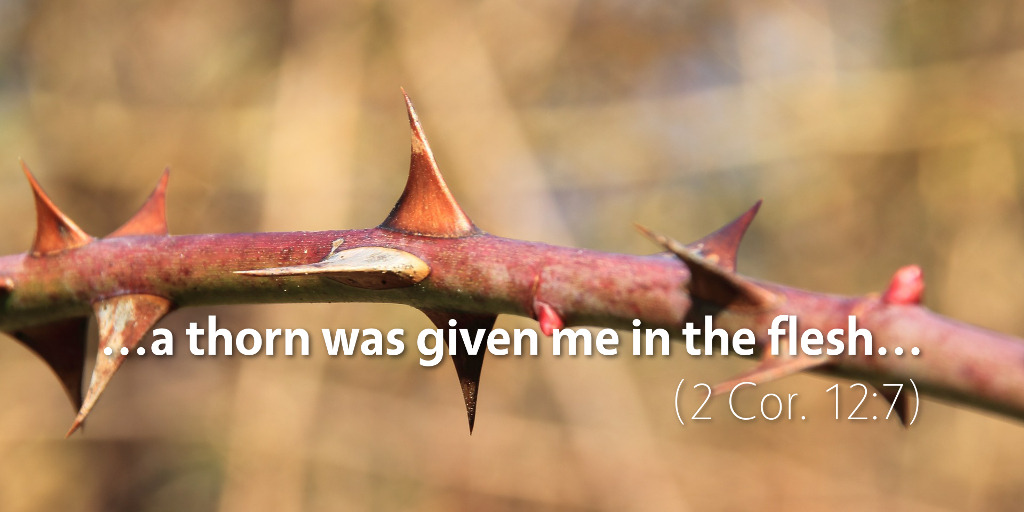 Weakness Keeps us from Haughtiness

In 2 Corinthians 12:7, Paul acknowledges that his revelations were of “surpassing greatness,” using the word from which we get our word hyperbole—that is, to describe figures of speech marked by exaggeration for emphasis or effect. It isn’t that Paul has exaggerated the quality of the visions that he has received, but the opposite—the visions were so surpassingly great that the reality was hyperbolic to the point that he could not exaggerate what he saw with human language.

But, Paul also acknowledges that such revelations could easily cause a negative effect on a person. Specifically, such extraordinary visions could cause someone to become lifted up haughtily with arrogance and conceit. The word Paul uses twice in v. 7 is hyperairo, a compound word that brings together the words hyper (above average) and airo (lifted up). In other words, Paul is saying that the weakness he received was given so that he might not be hyper-exalted in his heart because of the hyperbole of the visions he saw.

But, what kind of weakness is Paul talking about when he describes a “thorn in the flesh”? Really, there are only three things we know about what Paul talks about here:

The simplest explanation, from my perspective, would say that this thorn in the flesh is probably a reference to some kind of problem that Paul had with his eyes, based on what he writes in Galatians 4:15: “For I testify to you that, if possible, you would have gouged out your eyes and given them to me.” There, Paul is saying that the Galatians felt such deep affection for Paul that, as they witnessed his deep suffering, they would have been ready to give him their own eyes if it would comfort him. This seems to be the kind of suffering that Paul might refer to as a “thorn in the flesh” here in his letter to the Corinthians, and we read of nothing else that gives us a plausible alternative explanation.

There isn’t any hint that this was the work of Satan over and against God’s desire to give good things to Paul. Rather, this story sounds like the story of Job, where Satan himself entered the throne room of God and asked to harass God’s servant Job, and God permitted Satan’s attacks up to a degree. It is interesting that Paul describes the fact that he received the thorn in the flesh in the passive voice without specifying who gave it to him: “…a thorn was given me in the flesh…” In some way, this weakness/ailment comes from God, but in another way it is also an evil part of the fall, so that Satan can use it to harass him. The mystery of God’s providence stands behind the vagueness of Paul’s words here.

But from this, we learn something exceedingly important—God gives us weaknesses in life that will not be good things in and of themselves. We don’t have to hyper-spiritualize life by describing horrible, terrible things as blessings, but we can feel free to label them as messengers of Satan to harass us in life. None of these things, for example, are good parts of God’s creation according to his original intentions:

But if these things aren’t good in and of themselves—and if they are even messengers of Satan himself, which our great adversary uses to harass us—then how should we respond to them? With passive fatalism, allowing them to wash over us, or in some other way?

Paul, in fact, gives us the model for how to wrestle with these weaknesses in v. 8.

Seek God in Prayer in your Weakness

Paul does not simply give up and allow these terrible things to flourish in his life. Instead, he wrestles with God in prayer. When Paul says that he “pleaded” three times with the Lord, the word he uses is the word for “advocate,” which is the same word the Apostle John uses in 1 John 2:1: “My little children, I am writing these things to you so that you may not sin. But if anyone does sin, we have an advocate with the Father, Jesus Christ the righteous.” Furthermore, this word is also the word used to describe the Holy Spirit as our Advocate in John 14:16: “And I will ask the Father, and he will give you another Helper, to be with you forever, even the Spirit of truth…” The best image you might have of such an advocate is a scrappy defense lawyer, working relentlessly to acquit his client.

And here, Paul says that he advocated for himself—and that he did it three times. These weren’t mild prayer requests, but wrestling, struggling, pleading sessions of prayer with the Lord—that is, with Jesus. In fact, by saying that he prayed three times, Paul is actually alluding to the prayers of Jesus himself in the Garden of Gethsemane. Our Lord prayed three times (Matt. 26:44) this prayer: “Father, if you are willing, remove this cup from me. Nevertheless, not my will, but yours, be done” (Luke 22:42). And when Jesus prayed, he also wasn’t praying mildly, but Luke tells us that Jesus was overcome with anguish as he prayed: “And being in an agony he prayed more earnestly; and his sweat became like great drops of blood falling down to the ground” (Luke 22:44).

Why, then, does God give Paul a weakness like this thorn in the flesh? Well, in part, we gain intimacy with God. There is an intimacy with God that we cannot enjoy except when we are forced to depend upon him in prayer. Only in the times of our greatest weaknesses do we recognize fully that we are weak, frail, creatures, and that God is the eternal, omnipotent Creator.

Here’s an illustration of this principle: until my daughter turned three years old, she was never really a cuddler. She simply never really wanted to be held, seemingly because she was too busy—there was always something to play with that held her attention, so she’d squirm until you would put her down. But I remember the first time she ran a significant fever—I knew right away that something was wrong because she could only be consoled when I held her—and I held her a long time. As much as I hated to see my daughter suffer, I also look back on those memories as some of the sweetest times I had with my daughter until she turned three, when she is much more apt to climb up into my lap, or to ask for me to hold her. The fever forced us to enjoy a daddy-daughter intimacy that wouldn’t have been possible if everything would have gone perfectly through her entire first two years.

Even when we don’t get exactly what we pray for, then, we get God.

But is that it? Is the benefit of weakness really only some kind of emotional benefit? Are we simply talking about warm fuzzies that we get, or is there something much deeper, much more profound here?

In fact, there is—and we will look at the rest of what Paul tells us tomorrow.