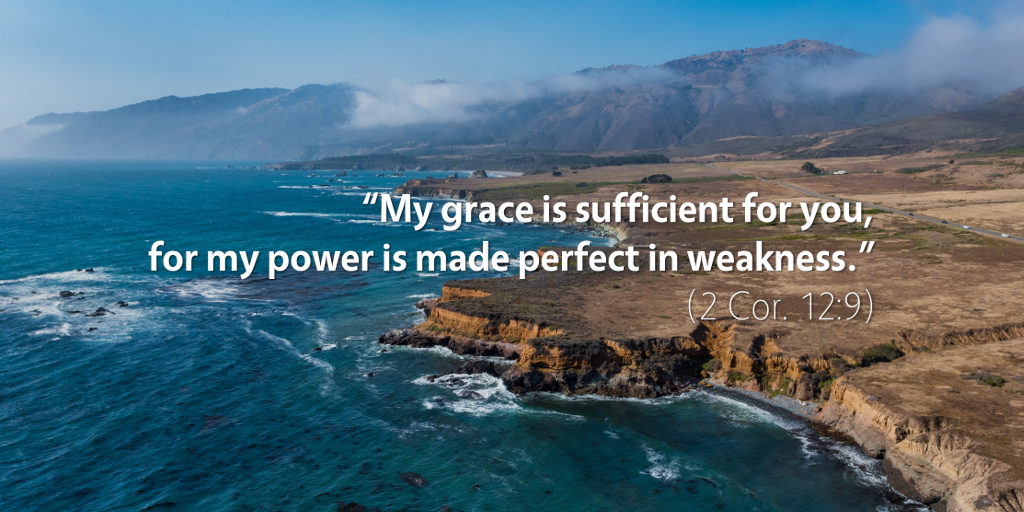 But after all this, we still have a lingering question: Why? Why would Paul insist that there is nothing to be gained by glory, but rather in weakness? And why should we seek God in the midst of weakness if he won’t necessarily alleviate the weakness through prayer? In 2 Corinthians 12:9–10, Paul not only reveals the key insight into how weakness serves as the foundation for our life in Christ, but also how we might learn actually to rejoice in our weakness.

The Grace of Jesus is Sufficient for You

After Paul pleads three times for Jesus for his thorn in the flesh to leave him, Jesus responds—but not to say that he will remove the weakness from Paul. Rather, Jesus says, “My grace is sufficient for you, for my power is made perfect in weakness” (2 Cor. 12:9). To understand the full significance of what Jesus is saying, we really need to break down this whole verse.

First, the word order in Greek of Jesus’ statement sounds more like this: “Sufficient it is for you, my grace…” In other words, Jesus actually places the word “sufficient” (meaning, “possessed of unfailing strength”) at the very front of the sentence. English doesn’t really have a way of doing this (unless you are Yoda), but in Greek, this is a method for placing heavy emphasis on an idea. In this case, the emphasis here is on the absolute, complete, utter sufficiency of the grace of Jesus for Paul in the midst of his weakness. Jesus here assures Paul that there is nothing he lacks in his weakness because he possesses the fully sufficient power of Jesus’ grace through this trial.

Second, many commentators point out that the grammar—specifically the verb tenses—of v. 9 is striking. Now, pay attention, because this isn’t only for grammar nerds, but the verb tenses have extraordinary pastoral implications:

Taken together, the way this sentence is written means that what Jesus said in the past has ongoing significance into the present—which means that Jesus’ power continues to be sufficient and to be made perfect in Paul’s life. But not only in Paul’s life—rather, these statements speak to us as well. Listen to the words of Charles Hodge:

The answer [Jesus gave] was ever sounding in the apostle’s ears, and not in his ears only, but in those of all his suffering people from that day to this….He says, to those who seek deliverance from pain and sorrow, ‘It is enough that I love you.’ This secures and implies all other good. (Charles Hodge, A Commentary on 1 & 2 Corinthians, 662–63.)

In other words, Jesus’ grace—that is, his love for you—is powerful to secure all other good for you. He has spoken this promise, and Jesus’ promise continues to stand faithfully for his people.

Weakness is the Tabernacle where Jesus’ Glory Dwells

But there is even more to this extraordinary principle of weakness. Paul goes on in v. 9 to write, “Therefore I will boast all the more gladly of my weaknesses, so that the power of Christ may rest upon me.” The word for “may rest upon me” (episkenoo) is a compound word that is only used here in the New Testament. The two parts to the word are epi, meaning “on” or “on top of” (think of how the epidermal layer of your skin is the top layer of your skin) and skenoo, meaning to make a dwelling place or to pitch a tent.

That latter word, skenoo, however, has significant usage in two other places in the New Testament: in John 1:14, and in Revelation. In John 1:14, we read, “And the Word became flesh and dwelt among us, and we have seen his glory, glory as of the only Son from the Father, full of grace and truth.” Literally, this is the word for pitching a tent—like the tent of the tabernacle, so the idea is that Jesus is the glory of God who has tabernacled among us just as the indwelling, shekinah glory of God dwelt among God’s people in the tabernacle in the Old Testament.

And then, in Revelation, this word is used to describe our ultimate dwelling place of God after Jesus defeats his enemies completely and brings his people to dwell with him forever: “And I heard a loud voice from the throne saying, ‘Behold, the dwelling place [lit., “tabernacle”; noun form of the same word: “skene“] of God is with man. He will dwell with them, and they will be his people, and God himself will be with them as their God.'” Here again, this word conveys with it the idea of how God tabernacles among his people:

But right now, Paul is saying that power of Christ tabernacles upon us in the midst of our weakness. Our weakness serves as the tabernacle for the indwelling presence of God, as the theatre for Jesus’ glory.

The word is episkeose, may pitch its tent upon me; i.e. dwell in me as in a tent, as in the shechinah dwelt of old in the tabernacle. To be made thus the dwelling-place of the power of Christ, where he reveals his glory, was a rational ground of rejoicing in those infirmities which were the condition of his presence and the occasion for the manifestation of his power. Most Christians are satisfied in trying to be resigned under suffering. They think it a great thing if they can bring themselves to submit to be the dwelling-place of Christ’s power. To rejoice in their afflictions because thereby Christ is glorified, is more than they aspire to. Paul’s experience was far above that standard. The power of Christ is not only thus manifested in the weakness of his people, but in the means which he employs for the accomplishment of his purposes. These are in all cases in themselves utterly inadequate and disproportionate to the results to be obtained. The treasure is in earthly vessels that the excellency of the power may be of God. (Charles Hodge, A Commentary on 1 & 2 Corinthians, 663–64.)

This is why Paul urged us to seek something better than glory—if we seek glory directly by hoarding power, money, or fame, then we will never get it. Glory can’t be procured that way. Instead, we find glory when God brings us to places of weakness, since weakness is the tabernacle for Christ’s glory.

And indeed, weakness was also the place of Jesus’ greatest glory, as Paul goes on to write in the next chapter: “For he was crucified in weakness, but lives by the power of God” (2 Cor. 13:4). The tabernacle and theatre of Jesus’ glory was not his transfiguration on the mountain, but the cross itself, where Jesus bled and died in utter weakness, as a lamb led silently to the slaughter, utterly abandoned by his Father in heaven. Frank Matera, then, offers this important clarification to what Paul is teaching us:

We then, with Paul, may be content for the sake of Christ with weaknesses, insults, hardships, persecutions, and calamities (2 Cor. 12:10), for two reasons. Since our weakness is the tabernacle of Christ’s glory:

This is the thing that is better than glory. This is the reason that Paul refused to boast about his visions and revelations, and instead insisted upon pointing at his weaknesses—because Christ was glorified more in his weaknesses, and because he experienced the power of Christ most perfectly there.

This theology ought to transform our outlook on life fundamentally. Rather than living in fear of weakness, or rather than nursing bitterness over our lot in life, this gives us a theology to understand at least the tip of the iceberg into why God entrusts suffering to us. We will never understand everything of the “why” behind our suffering, but Paul here unpacks to us the “how”—that is, how God works. He doesn’t work by making his people strong, invulnerable, pristine, and glorious in themselves.

Rather, he brings us into weakness and suffering that our frailty might be the thin tentskins where the shekinah glory of Jesus himself rests in our lives.