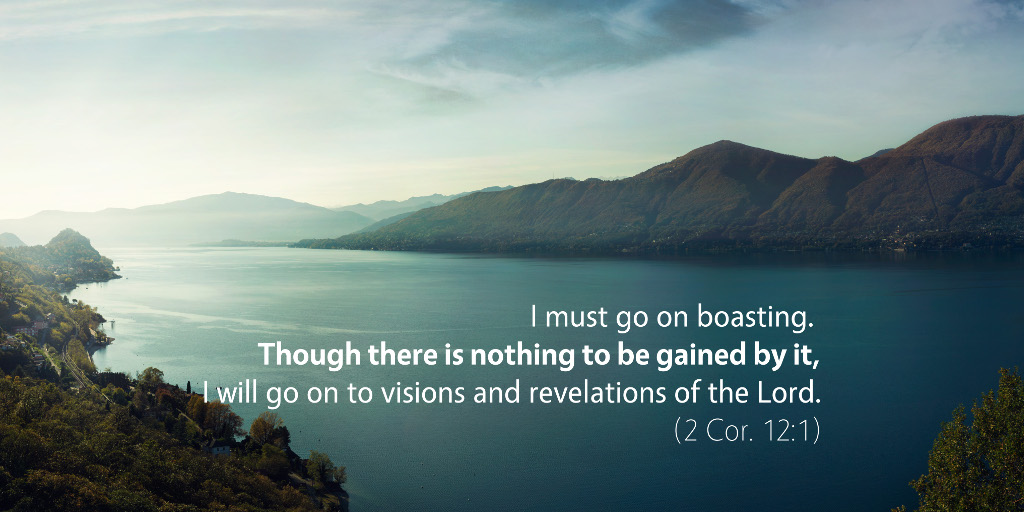 In 2 Corinthians 12, Paul is continuing his pleading with the Corinthian church not to follow the “super-apostles” (2 Cor. 11:5) who claimed to have secret, special knowledge about Jesus. This isn’t a power struggle, pitting Paul’s ego against theirs, but rather, Paul writes that he feels “a divine jealousy for you, for I betrothed you to one husband, to present you as a pure virgin to christ” (2 Cor. 11:2). Paul, therefore, seeks to establish his credentials as an apostle over and against the credentials of the super-apostles—and in doing to, Paul also lays out a vision for ministry and the Christian life.

There is Nothing to be Gained by Glory

Paul does not go about establishing his credentials, however, in the way that we might imagine. In fact, Paul is so reluctant to boast about some of the glories he has experienced that he speaks in the third person about visions and revelations in the third heaven that God showed him where he heard things to sacred for humans to lawfully repeat (2 Cor. 12:1–4). Paul insists that “On behalf of this man I will boast, but on my own behalf I will not boast, except of my weaknesses” (2 Cor. 12:5).

Now, it isn’t as thought Paul would be lying to make such claims. That is not the case at all: “Though if I should wish to boast, I would not be a fool, for I would be speaking the truth” (2 Cor. 12:6). Instead, Paul wants the Corinthian church to focus on their own experience of him—what they themselves have seen and heard—rather than obsessing about the glories that Paul had enjoyed (2 Cor. 12:6).

But why would this be the case? If Paul did indeed see extraordinary glories, why would he choose not to reveal that fact for fourteen years (2 Cor. 12:2), and why would he speak of such a man in the third person rather than simply saying the he had been that man?

Quite simply, Paul explains that he does not want to boast in the glories he had experienced because “there is nothing to be gained by it” (2 Cor. 12:1). Glory is the wrong thing for Christians to obsess about in this life.

We should balance this statement, however, with the fact that Paul does say, “I must go on boasting” (2 Cor. 12:1). Helpfully, Colin Kruse explains this tension by writing, “While the apostle is convinced that there is nothing to be gained by boasting, he probably recognizes that in the present situation there is much to be lost if he does not” (Colin G. Kruse, The Second Epistle of Paul to the Corinthians: An Introduction and Commentary, 200). If Paul does not describe the glories he experienced, the Corinthian church will likely be led away into apostasy, so Paul must insist that he has seen unspeakable visions and revelations from the Lord.

Is it the case, then, that Paul gets the privilege of experiencing glory, but we normal Christians are shut out of it? Well, yes and no—yes in the sense that we won’t experience these same kinds of glories in this life. Paul had these experiences because he was an apostle of Jesus specifically commissioned to build the foundation for Christianity on the chief cornerstone of Jesus Christ himself (Eph. 2:20).

But it simply isn’t the case that we are shut out of the good that Paul receives. Instead, Paul is encouraging us away from seeking glory directly so that we can experience something better than the glory that the super-apostles are peddling, and Paul wants us to experience the fullness of that something better.

Seek Something Better than Glory

So, while Paul reluctantly describes the glories he experienced, he begins to turn the attention of the Corinthians to his weaknesses. So, in 2 Corinthians 12:5, he writes, “On behalf of this man I will boast, but on my own behalf I will not boast, except of my weaknesses.” Paul is doing the opposite of what the wizard of Oz did—he’s saying, “Pay no attention to the great and powerful Oz—focus instead on the weak, frail, fat man behind the curtain.”

And this isn’t the first time Paul says this, either. Check out what Paul had written in 2 Corinthians 11:

But why? Why would Paul insist so much on his own weakness as a credential in and of itself, and why would Paul urge the Corinthians to follow him in the weakness he models? Why is weakness such a good thing?

We will explore the answer to that question over the next two days, but think for a moment on these questions about our own weakness in life and in ministry:

We’ll return to that question tomorrow.