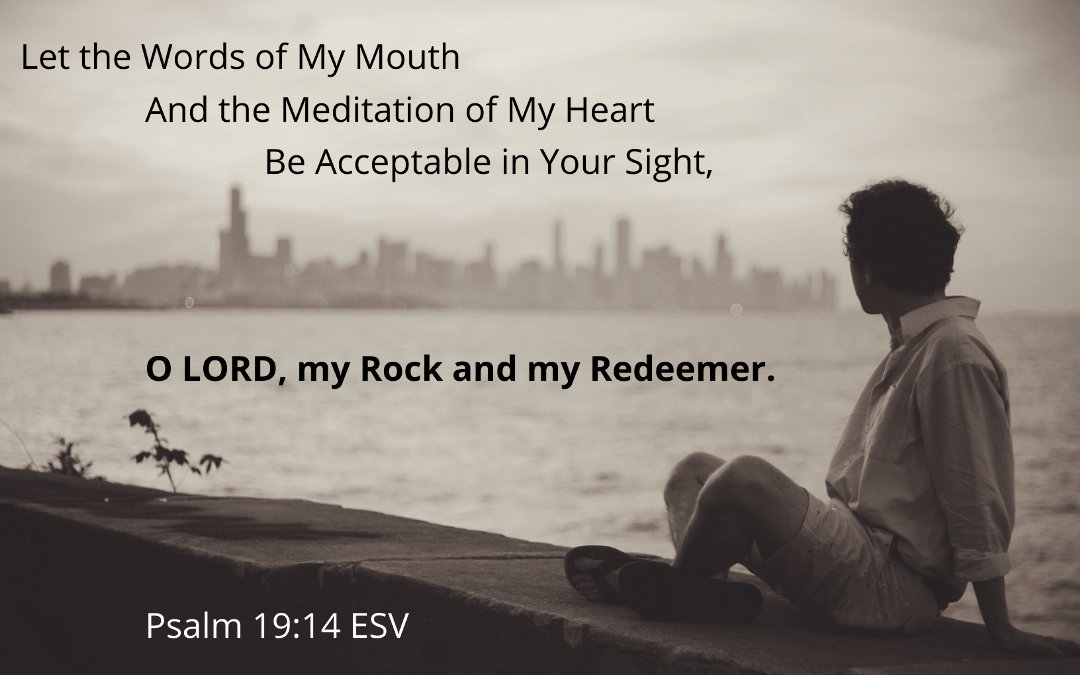 This is what David explains in the final verses of Psalm 19:

12Who can discern his errors?
Declare me innocent from hidden faults.

13Keep back your servant also from presumptuous sins;
let them not have dominion over me!
Then I shall be blameless,
and innocent of great transgression. 14Let the words of my mouth and the meditation of my heart
be acceptable in your sight,
O LORD, my rock and my redeemer. (Psalm 19:12-14 ESV)

Let’s break this down a little into a few guiding principles to help us interpret this.

David Uses the Law to Expose His Sin, Not to Forgive It

The first thing to recognize about what David does in this prayer is that he isn’t citing the Law as evidence for his innocence. He isn’t pointing to the Law and saying, “O LORD, my rock and my redeemer, I am innocent from hidden faults and blameless before you!” He understands that he hasn’t yet achieved perfection under the Law.

In fact, he assumes that he has faults that are “hidden” from him. The word used here for “errors” describes a sin that is committed in ignorance (e.g., Lev. 4:13 or Job 6:24). The fact that the sin happened unintentionally doesn’t make it acceptable, but that kind of sin wasn’t judged as harshly as sins that were committed willfully. David’s relationship to the Law is to use it as a diagnostic tool to find out where he is still guilty, and not as justifying tool to proclaim himself innocent.

This is the main contention of the New Testament writers to write strongly against the wrong use of the Law. It isn’t that they are rejecting the Law altogether, but they absolutely reject any idea that we can use the Law as a platform to declare ourselves righteous. The Law simply doesn’t work that way.

The only way for anyone to be saved—at any point throughout salvation history—is through faith in Jesus Christ. People like David didn’t necessarily know the details of who Jesus would be, so they were required to have faith that God would fulfill his covenant promises, but we do know what God has done to save his people. He sent his Son to be born under the Law so that he could fulfill the Law, perfectly obeying the Law in ways that we could not, and suffering under the full weight of the curse of the Law in our place, as we deserved.

Jesus is our only hope for salvation—not the Law.

David Longs for Communion with God

So instead of misunderstanding David as a legalist, let’s listen more closely to his real desire. David wants to be blameless.. In these final verses, he pleads for God to help him to discern his ignorant sins so that he can be declared innocent from hidden faults. (The word for “hidden” is the same word used to describe how there is nothing “hidden” from the sun’s heat in Psalm 19:6.) Then, he asks God to graciously hold him back from presumptuous sins. And finally, he pleads that every word of his mouth and meditation of his heart would be “acceptable in your sight, O LORD, my rock and my redeemer.”

But why? What’s David’s motivation behind his desire for blamelessness?

Quite simply, David longs for communion with God.

In the context of the whole Psalm, here is what is happening. David is first standing in awe of God’s majesty and glory as he listens to the praises of creation. Then, as he studies Yahweh’s Law and finds it to be perfect, reviving, sure, etc., he wants nothing more than to know the God of creation who has crafted such a perfect Law. There is wisdom here, and David wants to know the wise God who gave this Law—to know this God is the great reward David mentioned in Psalm 19:11.

David wants to be accepted by this God: “Let the words of my mouth and the meditation of my heart be acceptable in your sight, O LORD, my rock and my redeemer.” He wants to be embraced by God and to know him better and better.

This isn’t the same thing as being justified by God. David doesn’t embrace the Law in order to make himself righteous before God, because only God can make sinners righteous, by grace through faith. Our union with God was established perfectly at the death and resurrection of Jesus Christ, and the ebbing and flowing of our obedience and holiness before the Lord can do nothing to affect it.

Theologians, however, make an important distinction between our union with God and our communion with God. Think about it like a marriage. If you had an affair, that wouldn’t automatically sever your union with your spouse. Legally, you would still be considered married to your spouse unless you went through the divorce proceedings to break that union.

But an affair would absolutely destroy the communion you have with your spouse. Even if you tried to cover it up, that violation of your spouse’s trust would be an onerous burden on any kind of relational intimacy you might have otherwise had until you were able to work through it.

Our union with Christ is inviolable, and there is nothing that we could ever do to destroy it. Even the most severe spiritual adultery is something that Jesus Christ has already died for, and he extends grace to us through the victory he won over sin through his resurrection. Shout this to whoever will hear it: There is sufficient grace for even the vilest of sinners! Nothing you do can separate you from the love that God has for you in Jesus Christ!

But our communion with Christ can absolutely change over the course of our lives. Sin clouds our intimacy with him, and what David teaches us here is to learn to love the Law of God as a tool for exposing our hidden faults as well as illuminating the danger of presumptuous sins.

David isn’t interested in blamelessness for its own sake, or for the sake of trumpeting his righteousness to the world.

He wants to be blameless so that nothing at all will stand between him and his God—that is, between his rock and his redeemer.